From light and airy impressionism to energetic abstract expressionism, we know the movements of modern art, its main works and authors.

The modern art comprises a series of artistic movements, which were developed over a period of 100 years, and each has an avant – garde aesthetic, which continues to inspire artists today.

That is why we consider it necessary to know a little about these movements and characteristics of modern art works and their authors.

What is modern art?

One of the main reasons why we consider it necessary to know a little more about this art is because many confuse this artistic expression with the contemporary one.

However, the modern is the one that took place in the late 19th and early 20th centuries. One of the characteristics that most identifies its authors is that they sought to reimagine and reinterpret; thus rejecting the aesthetic rules of the previous styles.

From light and airy Impressionism to energetic Abstract Expressionism, Modern is made up of several major movements.

Impressionism challenged the rigid rules and realistic representations of academic painting. Gone are those paintings whose detail of the eyes, hair and others was noticeable with great clarity.

It emerged in 1872, when Claude Monet innovatively used blurry brush strokes, a focus on light, and a vivid color palette to paint Impression, Sunrise.

This style had quite an influence on French painting until the end of the century, some of the most prominent representatives were Monet, Pierre-Auguste Renoir and Edgar Degas at the forefront.

Inspired by freedom; Regarding ways of expressing themselves through art, it is for the Impressionists that some authors such as Paul Cézanne, Paul Gauguin, Vincent van Gogh and Henri Toulouse-Lautrec also decided to ‘venture’ into unconventional styles.

Colorful movement that began in the 1890s and shows an interest in emotion and a preference for subjective interpretation, over realistic representation.

The name is due to the fact that it was founded by an avant-garde group, led by authors such as André Derain and Henri Matisse-Fauvism.

It appeared for the first time in the early twentieth century. And, like the Post-Impressionists, the Fauvists preferred to leave behind more realistic skin tones and / or earth tones by using more surreal tones and an emphasis on the subjective perceptions of the author in their representations, which were often abstract in appearance.

This occurred before the First World War. Hailing from Germany and Austria, they decided to opt for an experimental approach as did the representatives of the aforementioned movements.

Like characteristic Post-Impressionist and Fauvist works of art, the pieces depicted in the Expressionist style convey a fascination with bright, artificial color as well as individualistic iconography in painting art. 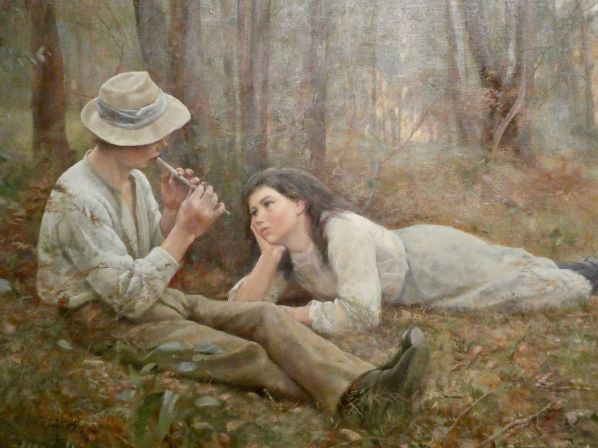 Characterized by fractured and deconstructed forms, Cubism marked the change of this genre towards abstraction.

Begun in 1907 by Georges Braque and Pablo Picasso, it materialized as upside-down paintings, multidimensional sculptures and avant-garde collages.

Like other modern artistic movements, Cubism emphasized the subjectivity of its authors, because, as Pablo Picasso said: “We did not have the objective of discovering Cubism, we only wanted to express what was in us”.

These characteristic works have been very influential, not only in other paintings, but also in other arts such as film and photography. Developed in the 1920s, represented by the visual authors Salvador Dalí, Max Ernst, Man Ray, Joan Miró and Yves Tanguy. Who came together to found surrealism, which is based on the subconscious.

Lacking any control exercised by reason, the genre culminated in a diverse collection of dreamlike representations directly from their imaginations.

Last move, but not the least. Developed in the mid-twentieth century, some decided to leave figurative styles behind to give way to the abstract.

These painters placed great emphasis, not only on the key characteristics of this genre such as color, composition and emotion, but also on the creative process of it.

As mentioned above, it is very common for people to confuse this genre with contemporary. One of the main reasons for this confusion is that both seek to break with the aesthetics of centuries ago and both focus; Primarily, it is the author’s personal perception of the world around him.

However, it should be clarified that as we have seen, modern art ranges from Impressionism to Abstract Expressionism, while contemporary begins with Pop Art and continues to develop today.

The interesting thing about the emergence of these movements is that it was from this moment that it ceased to be just a means of historical and informative ‘capture’, to become a means of artistic expression.